On the first advent weekend I was finally able to hike through the volcanic landscape in Lanzarote. The sun was shining and I enjoyed nice hiking weather at around 23 degrees. Hiking in Lanzarote takes you through unique scenery.

The easy hike starts near the wine-growing region „La Geria“. It remains mainly flat and on a broad path with some information boards about volcanic activity set out by the national park administration. The trail is known as one of the most beautiful hiking opportunities in Lanzarote.

On Saturday morning I parked in the designated lot near the Montana del Cuervo. The striking mountain was only created by the eruptions in the years 1730 to 1736 ( see more details Unterwegs auf Lanzarote (2) ). The side flank was torn open by the explosions, so that the caldera can be walked on without having to climb over the crater rim. The circumnavigation takes about an hour. If you go counterclockwise, you will be able to visit the caldera after a short time.
I descended into the volcanic crater. For the very short and only slightly steep descent, I didn’t even have to use my hiking poles. In the caldera, I admired the torn rock faces  and marveled at the diversity of the lava formations. I was thrilled. When do you have the chance to walk into the interior of a volcano as easily and safely?
Many tourists went back after visiting the caldera. As I was not in a hurry I did not miss out the walk  around the mountain. I was rewarded with wonderful views of the vast lava deserts that surround the volcanic area and of the fire mountains in the Timanfaya National Park (see Unterwegs auf Lanzarote (2)  ). 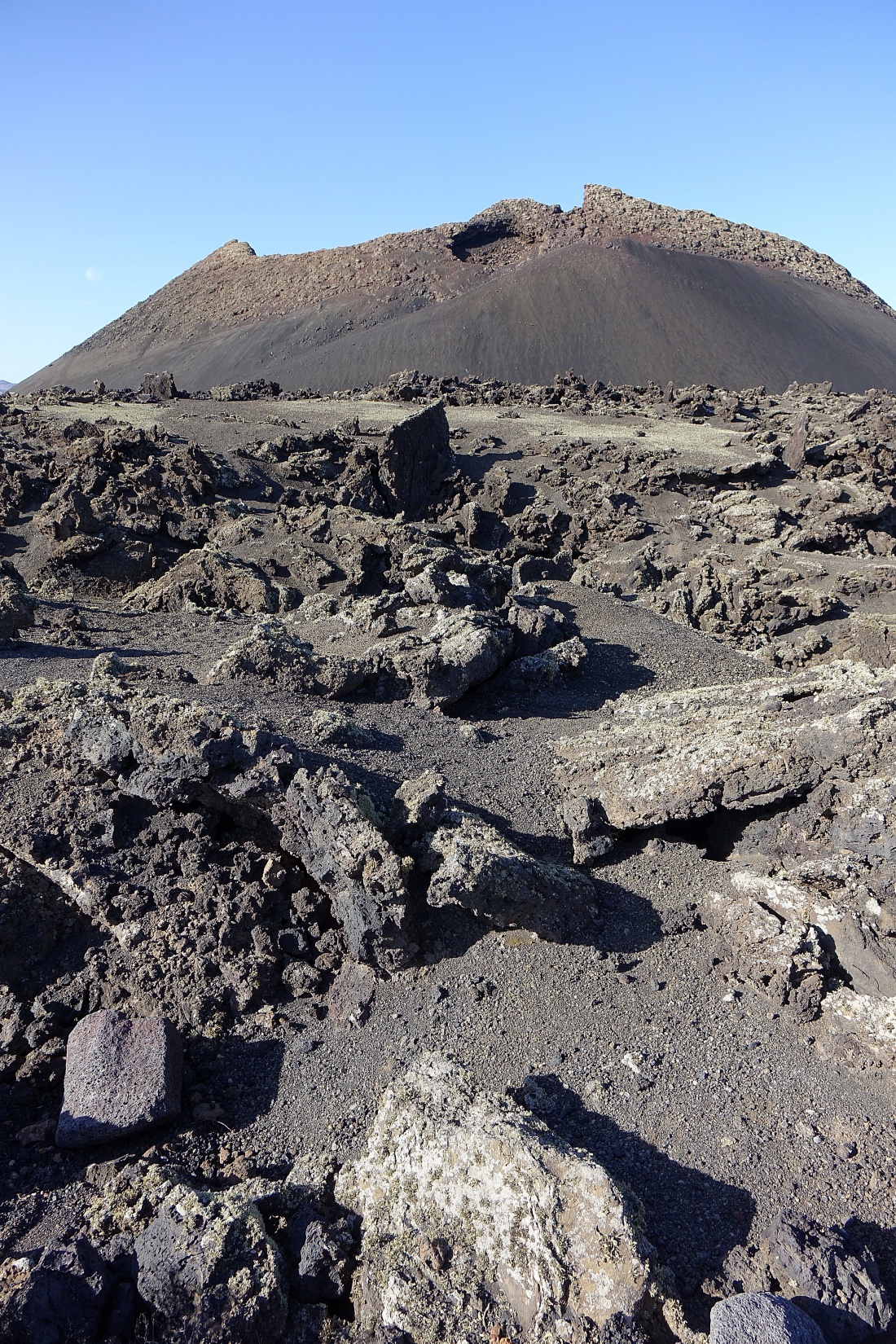 In „La Geria“ I spent my lunch break in an overcrowded bodega. The place offers wine tasting and is the destination of countless coaches.

The two-volcano hike can easily be done in one go. The hiking trail at the Caldera Colorada starts just one kilometer from the Montana del Cuervo. Only because of the lack of refreshment stops and toilets near the trails,  I had decided to have a break in between.

On the short hike (approx. 1 hour from the parking lot at the Caldera Colorada) you can circle the mountain, but you may not walk into the crater.
In contrast to my morning hike, I was walking alone. It was even nicer. A breathtaking view of the shimmering red rock walls opened up around every corner. Several volcanic bombs, huge round boulders that had been thrown out of the mountain during the eruptions lay there, looking like the toys of giants.

I was also fascinated by the interplay of colors in the scenery: rust-red rock walls, yellowish lichen, which forms the basis for the coming vegetation, small green bushes on the slopes exposed to the trade winds, and brown-black picon (lava pebbles). And all of it set against a blue sky full of delicate clouds … 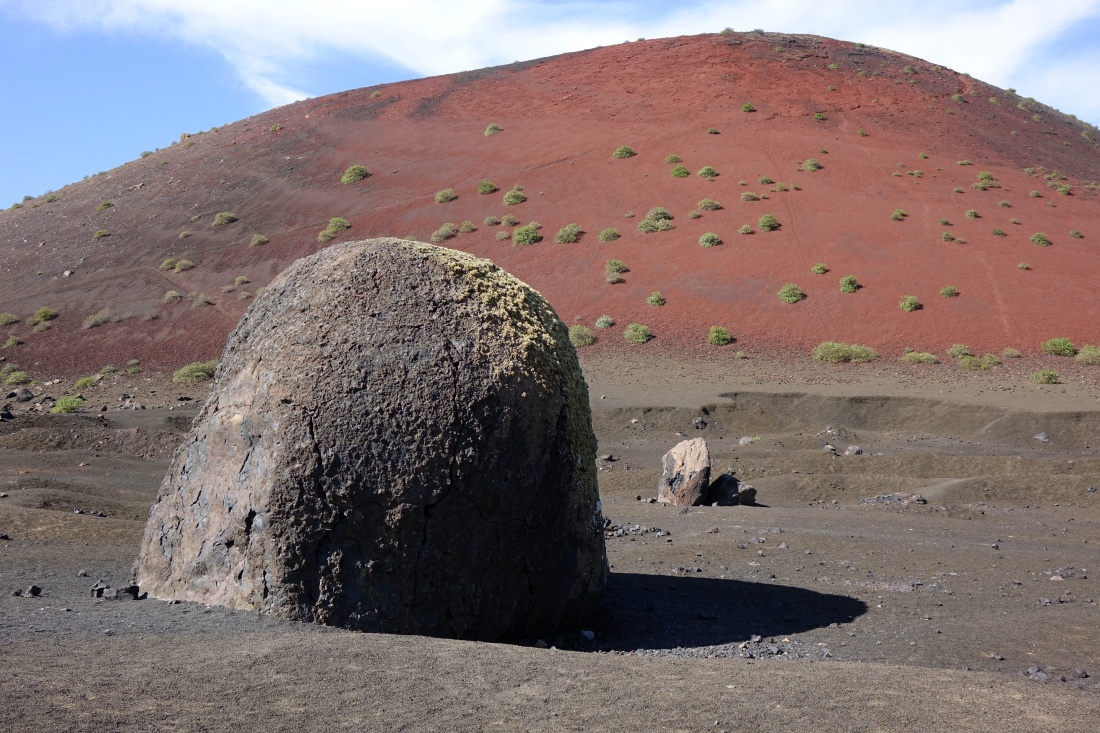 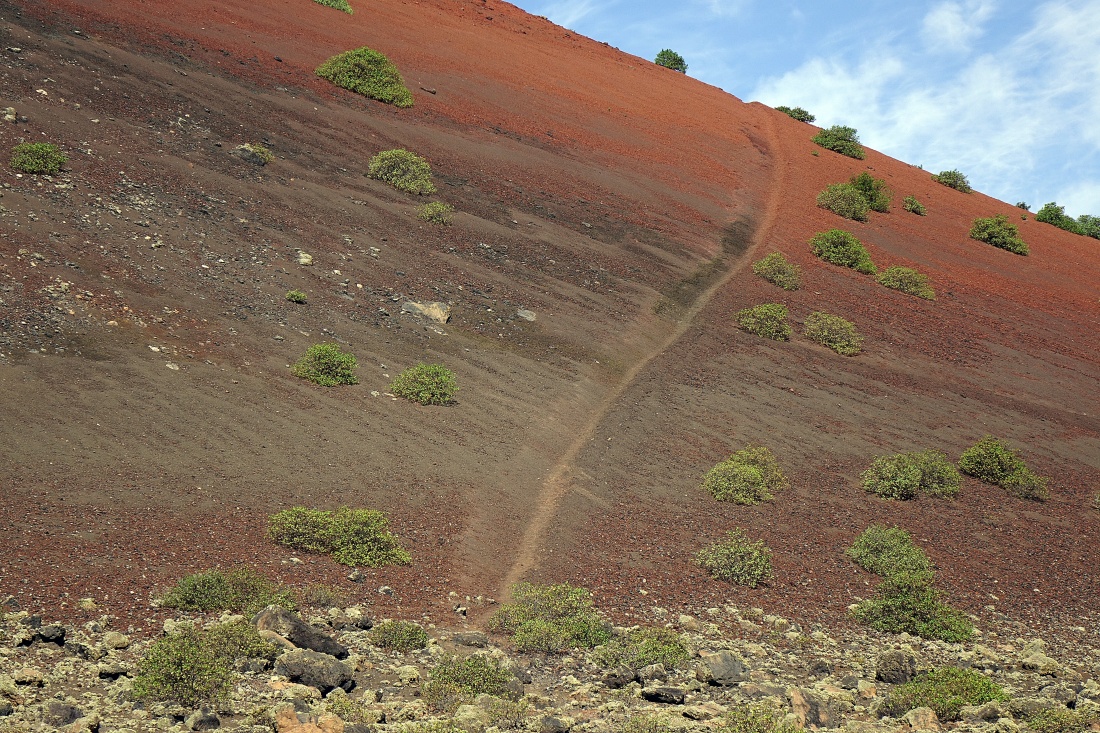 Having enjoyed hiking in Lanzarote so much, I decided to go for another walk on Sunday.

The bay of Famara lies in front of the steep Famara rock massif. Surounded by a great arid landscape Famara Beach is the longest dune beach in Lanzarote. Due to constant north winds, the surf is usually wild, making the area a mecca for surfers.

After I had enjoyed  a second breakfast in the quaint town of Caleta de Famara, the hike took me up a bit on the slope, and then I followed the trail under the ridge.
On my way I constantly had wonderful views of the offshore islands and the inlet El Rio. La Graciosa, the main island, has only 600 permanent residents and is mainly natural. You can take a day trip there with a supposedly rather rocky boat and then hike through an enchanting area. On my next stay in Lanzarote (which is already on my bucket list!) I plan to go on hiking tours in La Graciosa
Finally,  I went down to the fantastic beach and then walked back. There are small stacked stone walls in the dunes, where you can relax sheltered from the wind. In one of these I ate my snack and admired the wild surf. The waves were apparently not high enough for surfers. On my way back to the car I saw only a few. 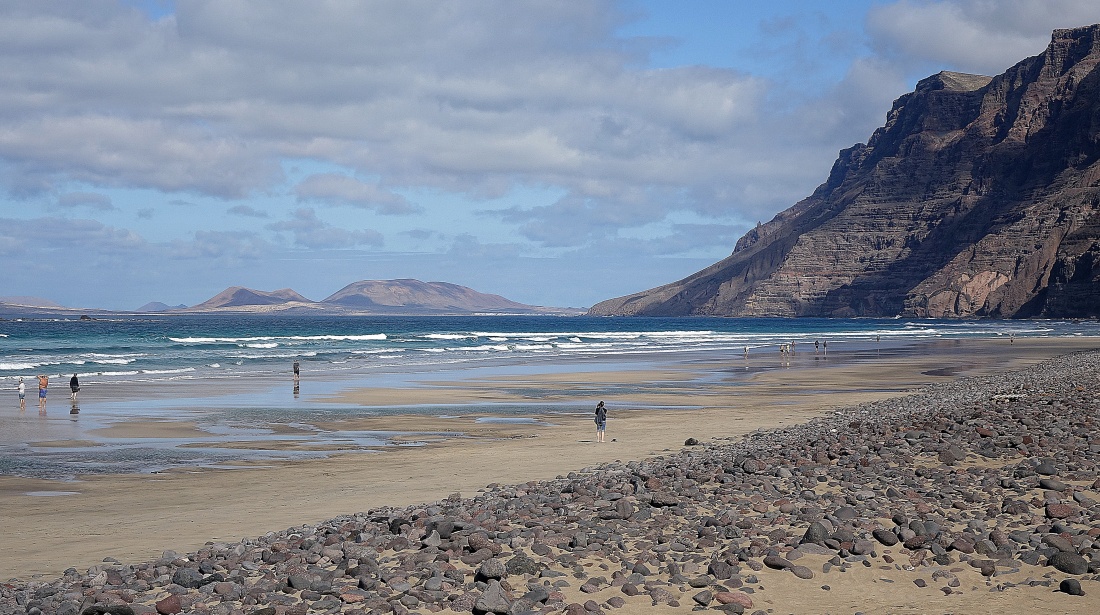 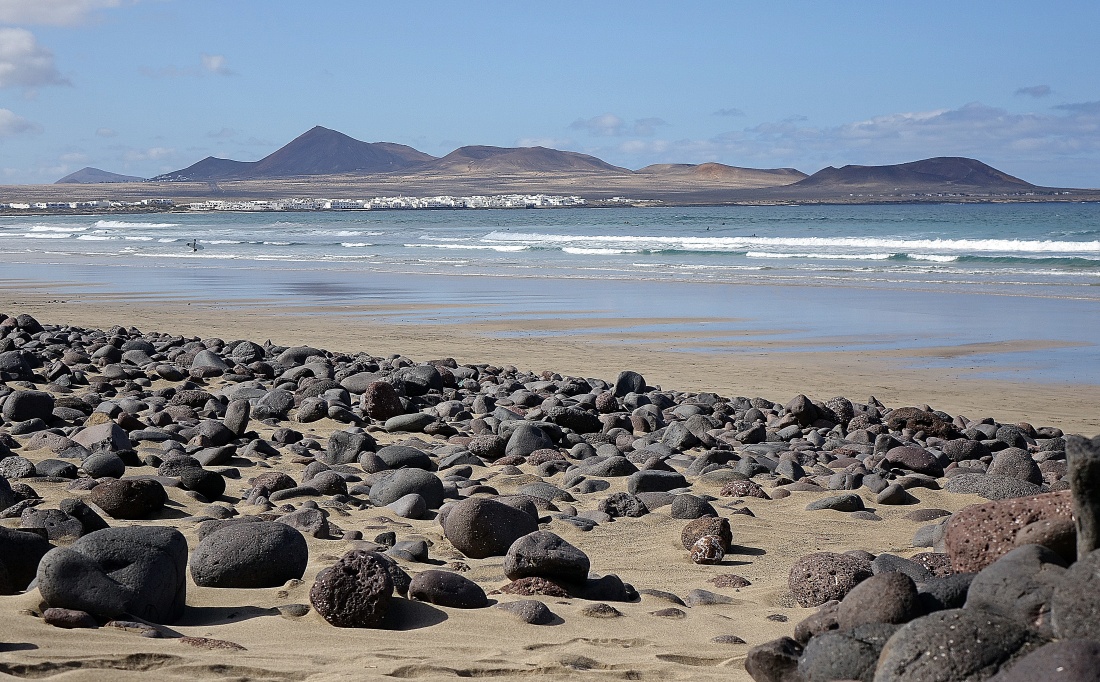 Before going on this hike I had wondered whether it was going to be boring. It turned out to be nothing like that. The views of the islands La Graciosa and Montana in the changing light conditions also made up for the fact that during my trip to the Mirador del Rio I had not enjoyed the view of the archipelago due to thick fog Unterwegs auf Lanzarote (1)
The steep rock massif impressed me even more from up close and even the steppe was not as arid as it seemed at first look. Plants adapted to semi arid conditions could be discovered.

Have you been hiking on the Canary Islands and how did you like it ?
Looking forward to your comments and likes.

This site uses Akismet to reduce spam. Learn how your comment data is processed.