On sunday the weather looked much better. Contrary to the previous day https://wanderlustig2019.wordpress.com/2019/11/29/unterwegs-auf-lanzarote-1/
it was only slightly cloudy and became more and more beautiful in the course of the day.

First I drove to El Golfo at the southwest coast of the island. In a bay close to the small idyllic village there is a popular excursion destination, the Charco de los Clicos. It is a volcanic crater half of which has slided into the sea. In front of a black lava beach lies the green shining lagoon lake. The whole thing is framed by a red slope. At the beginning of the path that led to Charco de los Clicos I put on my hiking boots. But this would not have been necessary, because after five minutes I arrived at the Mirador, which offers a breathtaking view of the colorful landscape.

Then I drove along the coast to Yaiza. The most famous stop on the wild cliff coast is at the so-called Hervideros. There the waves crash with great force against the rocks of deep black lava, shooting up through holes in the rocks. The churned up white spray and the light blue sea offer a very nice colour contrast to the lava rocks. One can walk around in the area and look at some places on rock balconies into the spray.

Meanwhile already a little hungry I drove to Yaiza. The little town, which had already been awarded several times as the most beautiful Spanish village, presented itself with picturesque Canarian architecture, and was polished and renovated in an exemplary way. But first I wandered through the village that was deserted on Sunday. The restaurants were closed. Finally, I discovered a very well frequented bar at the main street, where one could also choose from some hot dishes at the bar. The local people also took the food home with them. My stewed chicken with vegetables and potatoes tasted excellent and I even got a seat at the table of an English couple with whom I had a very nice conversation.

Well strengthened I went to THE highlight of a visit to Lanzarote, the National Park Timanfaya with the Fire Mountains (Montanas del Fuego).

The following excerpt from Wikivoyage (translated from German) tells the story of its origin:
„On September 1st, 1730, the earth broke up near the village of Timanfaya, a mountain was formed, from whose summit flames shot up into the air. It was the beginning of a huge volcanic eruption, which lasted for 6 years. In the course of it, 11 villages were destroyed together with the most fertile farmland of the island Lanzarote. In the earth, a fissure of a length of 14 km was formed at the edges of which lava fields were originated. The longest lava flow had a length of more than 20 km and finally reached the sea at Arrecife.
During this natural spectacle that was accompanied by numerous seaquakes, a major part of the population of Lanzarote lost its livelihood …
In 1824, another volcanic eruption occurred, the last one for the time being, its centre was located on the edge of the present National Park …“.

You cannot visit the national park on your own. It is necessary to strictly protect the sparse, nascent and extremely sensitive lichen cultures on the lava. Moreover, the ground is often undermined and there are dangerous crevices in the lava.

By car, after having paid the entrance fee (currently 10 €), one drives without any possible stops to the visitor centre „Islote de Hilario“, where one parks the car.

On the way to the national park you can also go on  a short ride on a dromedary. I had already tried camel riding once before.  The rocking gait of the animals had not appealed to me and so I gladly renounced the pleasure.

The Visitors Center is located on a hill. There is also a panorama restaurant with huge windows and that was of course again designed by the artist Cesar Manrique from Lanzarote. Demonstrations of the strong earth heat prevailing at this place are shown. A dry tuft of plants is placed in a crevice of the earth that immediately goes up in flames. You can also admire the natural volcanic grill behind the restaurant. The barbecue is grilled over a walled hole in the ground using only the natural heat of the earth. In the restaurant you can order meat and fish prepared in this way. Supposedly this is very tasty, but I did not want to spend so much time with eating. 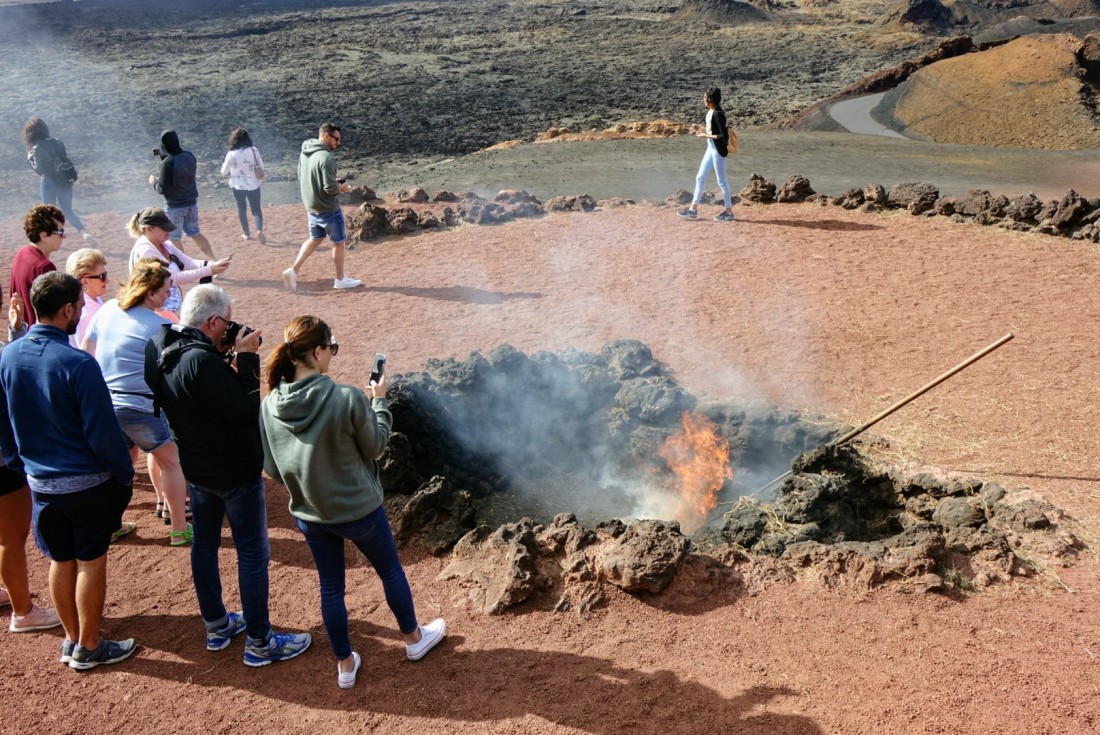 From the Visitors Center buses depart for a thirty-minute round trip on the „Ruta de los Volcanes“. The route runs for 14 km through a small part of a huge area. The bus stops briefly at prominent points, but one is not allowed to get out. After all this, my expectations were quite low when I sat down in the fully occupied bus, luckily on the best side for taking pictures, on the right in the direction of travel.

“… On September 1, 1730, between 9 and 10 in the evening, the earth suddenly opened at Timanfaya, two hours‘ walk from Yaiza. A huge mountain was formed.
Already in the first night and flames shot out of its summit, which continued to burn for 19 days. A few days later, a new gorge opened and the lava flow spilled over Timanfaya, Rodeo and part of Mancha Blanca.
The lava flowed northwards, at first like bubbling water, later viscous like honey. However, on 7 September, a huge rock rose from the depths with ominous thunder, forcing the lava to turn its flow westward and northwest. There it destroyed the towns of Maretas and Santa Catalina.
On September 11th, the violence of the lava was renewed. It covered and burned the village of Mazo, and for eight days afterwards it fell into the sea as a fiery cataract with a terrible roar, so that dead fish swam to the surface in huge quantities or were thrown to the shore. After that everything calmed down and the eruptions stopped.
However, on October 18th, three new gullets broke open directly above the burnt Santa Catalina, from which heavy clouds of smoke streamed out and spread over the whole island. They carried enormous amounts of ash and sand with them and thick drops of water fell down everywhere. The darkness, ashes and smoke caused by these droplets of water drove away the inhabitants of Yaiza and its surroundings several times.
But they returned again when the eruptions were not followed by any further eruptions. On October 28, when these events had lasted for ten days,
cattle all over the region dropped dead, choked by the stinking fumes.
From 1st to 20 November smoke and ash continuously erupted from the craters, and on 27 a lava flow rolled down the slopes at enormous speed. On 1st  December it reached the sea and formed a solidified island. On 16 December, the lava suddenly changed its course, no longer flowing into the sea, but buried the village of Chupadero and destroyed the fertile plain of Uga.
On 7 January 1731, new eruptions occurred, which destroyed the former craters again. Lava erupted from two openings, accompanied by dense clouds of smoke,
where red and blue lightning bolts raged. In addition it thundered like thunderstorms, which was very frightening for the inhabitants, since they knew no thunderstorms on their island.
On 10 January a high mountain piled up, which collapsed again the same day. Stones and ashes rained on the island and lava streams flowed over the Malpaís into the sea.
On 7 March, several volcanoes arose, rising in a row from east to west.
On 4 June, three craters opened at once in the Timanfaya region. They quickly merged into a single volcanic cone, from which a lava flow was released into the seaflowed. Ashes and lightning shot out of a side crater, white steam escaped from another one in a way that had never been seen before. By the end of June, all the coasts on the west side of the island were covered with huge quantities of dead fish, many species of which had never been seen before. Northwest of Yaiza, smoke and flames rose from the sea with violent detonations.
In October and November new eruptions disturbed the inhabitants. On 25 December the earth shook and on 28 December a lava flow shot out of a newly formed cone, destroying another village and a chapel near Yaiza …“

When the priest had to leave the island, the notes broke off, but the eruptions continued for another five years.

We slowly rolled through a landscape that seemed out of this world. The lack of vegetation, the various shapes and colours of the rocks and the silhouettes of the volcanoes were of extraterrestrial beauty. Timanfaya is often compared to a lunar landscape. I found that it looked more like the red planet, Mars. On the one hand I was very impressed by the dramatic volcanic landscape, I would have liked to shout „Wow“ several times, on the other hand after hearing the report of the eyewitness  I could vividly imagine how the rural population must have suffered from the never ending apocalyptic natural catastrophe in the 18th century. The volcanic eruptions have changed Lanzarote permanently. Large fertile areas were covered by a high layer of lava and were lost for agriculture.

But see for yourself how breathtaking this landscape looks. 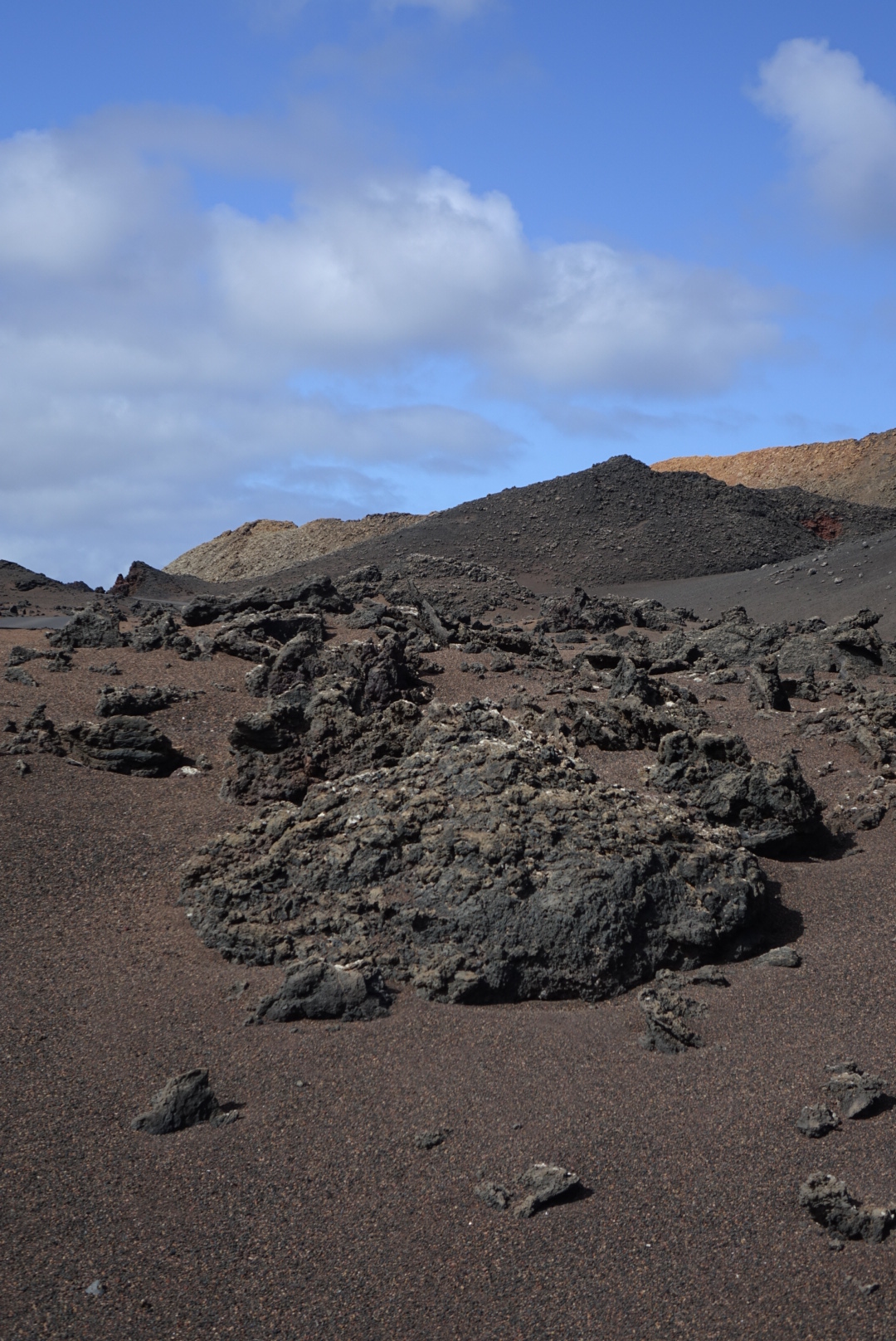 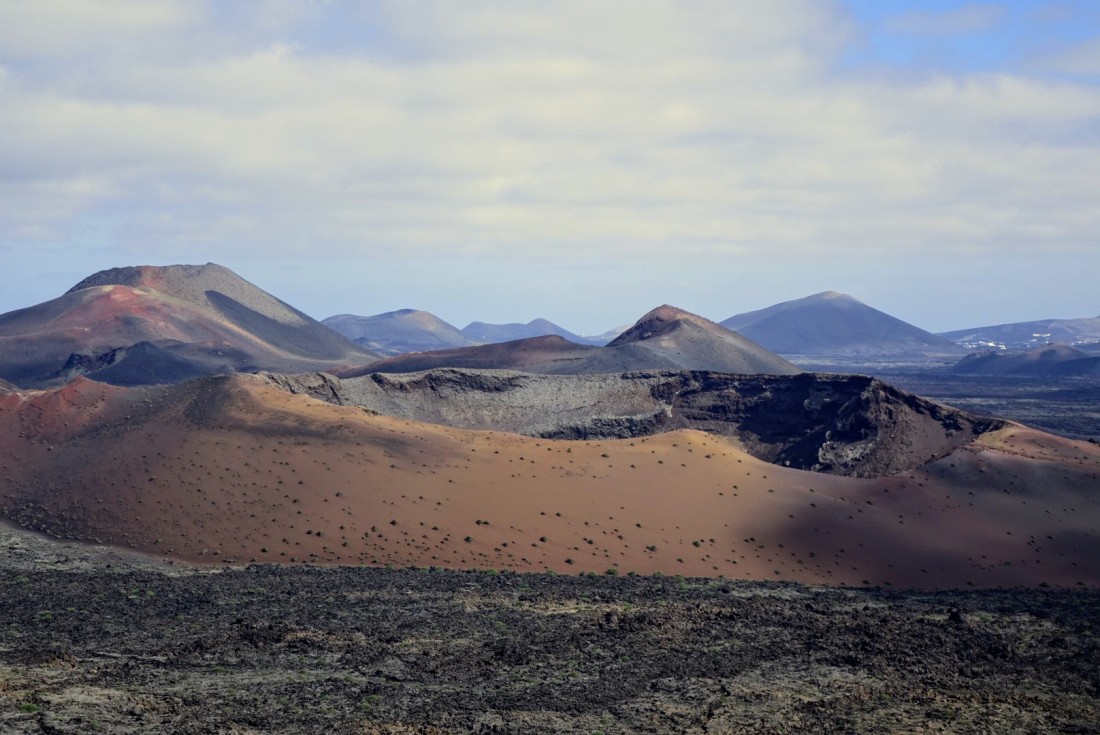 After the bus trip was over much too fast, I had coffee and cake in the restaurant and enjoyed once again the view over the spectacular volcanic landscape.
Finally, I visited the very informative exhibition about volcanism in general and in Lanzarote  at the visitors centre in Mancha Blanca and then made my way back.
By the way, the national park authority also offers guided free hiking tours for a small number of visitors. These can be booked online exactly one month in advance but they are supposed to be always fully booked immediately.

Before I returned to Costa Teguise, I visited the Fundacion Cesar Manrique, the house of the artist that was converted to an art museum. This extraordinary sight and further works of Manrique are reserved for a separate report.

Have you ever been in a volcanic landscape and how did you like it?

Looking forward to your comments and likes.